It's telling that Dante, so early in his journey, speaks of the inner voice that has grown faint, perhaps from too much silence.

When first I began to frequent monasteries, and to learn about the Benedictine way of living and being, the silence was deafening.  Too much noise.  I wanted to cup my hands over my ears, so much did the noise seem to suffocate me. In the stillness, I heard only a cacophony of voices. None of them really my own. 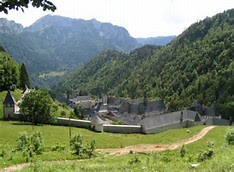 Of course, that was entirely the point.

In the early days of talking with these monks and also working with my spiritual director, they both regularly said to me, "Annie, Slow Down. Be Still."  Be Still, and Know that I am God (Ps. 46:10). Dante clearly hadn't been that still for some time. (Nor had I).  I didn't know that one must listen with the ear of the heart. I didn't even know how to listen with the ear of my heart. But that comes later.

One of my favorite places in the world is a valley in the French Savoie, La Grande Chartreuse. You can get there from Geneva, where I once lived, and it's not far from Chamonix. It is a valley of great silences and great beauty and where the snow capped peaks of the French Alps are visible to the naked eye, beckoning. I've done a fair bit of climbing there, around Mont Blanc, and stayed in huts along the routes.  I supposed those beckoning voices of the high alps were a kind of clarion call to my heart.  They hearkened spaciousness. They seemed to promise to draw me into the depths.  Deep calling to deep.

I first read about this magical valley in my all-time favorite cookbook, L'Auberge (Inn) of the Flowering Hearth, by Roy Andries de Groot. 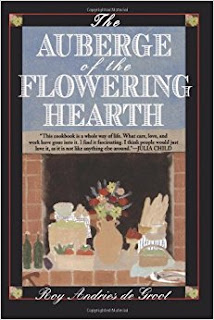 Describing his approach to the valley, he titles it "Journey to that High and Lovely Place." It is a place of intense beauty and great silence, a silence so utterly deafening as to call to the surface that faint whisper, that still, small voice. The Voice of Stillness.  If you would like to have an experience of this, watch the spellbinding movie about the monastery here, Into Great Silence.  Not for nothing is it referred to as "La Vallee du Desert."

At the Auberge, de Groot discovers a mountain cuisine, both rustic and refined, without any hint of artifice. He describes quail cooked over the living room hearth, and dripping onto little toasts. He also speaks of alpine potato pancakes, which remind me of the Rosti my French-Swiss grandmother cooked for me as child, and which I often ate myself in these high mountains.  Would you care to try them? They are delicious, especially with the addition of a little bacon.  The French changed the recipe a bit from the Swiss version, but they are both delicious. Here is his recipe:

4 medium russet potatoes
3 eggs
4 scallions, green part only, thinly sliced
2 cloves garlic, peeled and finely minced
2 T. fresh parsley, finely chopped
½ t. fresh rosemary, finely minced
4 T. clarified butter
2 T. vegetable oil
Sea salt to taste
Freshly ground Tellicherry black pepper to taste
2 T. heavy cream, more or less
Bake the potatoes until done. Cut open and scoop out the pulp. Place in a 1-quart mixing bowl, mash but not too much; add eggs, scallions, garlic, parsley, and rosemary. Add cream, just enough to be able to form patty-like mounds of the potato mixture.  Shape the pancakes about a quarter inch thick and two inches across. Heat 3 T. of the butter and 2 T. vegetable oil in heavy sauté pan about 10 inches in diameter, assuring you have enough oil to cover the pan. Form patties about ¼ inch thick and 2 inches wide.  Carefully place the patties in the butter/oil in the skillet. Fry until brown and crisp on both sides. Serve hot.

Legend has it that the river "Le Guiers," (pronounced gay) bound up with this high and lovely place, rises from two separate rivers, about six miles apart, in the high alps. One, de Groot describes, is on the slopes of the Dent-de-Crolles, the other at the foot of the Cirque de Saint-Meme.  Both these rivers tumble down the mountains onto the high plateau.  There, like an adolescent boy and a spirited girl, they tumble.  The boy river is said to be dreamy, lazy and slow, with jade green waters and deep, smooth pools. His name is Le Guiers Mort.  But he is hardly dead. "In Spring," de Groot writes, when the melting snows flood down into the valleys, he is as wildly alive as any torrent.  (Remember my post about the French language?).  His floods have destroyed villages and again and again drowned the cattle and ruined the crops.  The other, the girl river, has the reputation of being spirited and wild--of running a course of speed and violence, plunging, frothy, white.  Her official name is Le Guiers Vif.  Yet, she is hardly so alive during the summer droughts.  She can be as dead as the lily pond in cemetery.  Boy and Girl finally meet and merge at a village called "Entre-les-Deux-Guiers.  By then, they have already completed the work for which we must be grateful.  They have cut a path for us through a wall of rock almost five thousand feet high."  No still waters they. But they cut deep.

St. Bruno founded the monastery in 1085. The Romans had called the area "catursiani", meaning “little house where one is alone in an isolated and wild place.” (More on this later). And from this word comes “Chartreuse," the sweet green liquor distilled at the monastery there by "Les pères Chartreux" from a secret recipe.  The story of these monks, Groot describes, possessed of a secret process known only to them, and living at the top of their high valley in complete silence and isolation, is a saga entwined with the history of France, and a romantic one. 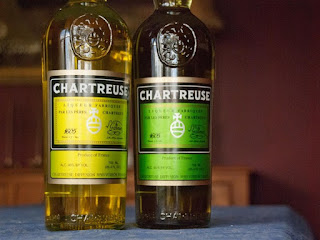 The recipe for Chartreuse came from a mysterious manuscript donated to the monks in 1602 by Marshal d’Estrées, a courtier of the French king, Henri IV. Today, the distillery, which makes the elixir from over 130 medicinal plants, both the yellow (lower sugar) and green (traditional) variety—is located in nearby Voiron.

Reading about Dante's journey, which eventually led to the climb into the heavens, I was reminded of this "High and Lovely Place" of Silences. Can you imagine yourself, making an ascent into this alpine valley? I love how de Groot describes his ascent, how the gorge opens out into a wide, wild valley, rising to a high plateau, and how this reveals the first glimpse of the great Alpine "massifs" (where I have climbed), looking like an immense and impregnable fortress, wreathed in pure white mist. I remember this view, and the granite walls that rose up, sheer and straight for almost five thousand feet, from the floor of the plateau.  De Groot says that behind this unscalable wall the white peaks mount higher still. I remember thinking about Dante when first I saw it.  This must have been how he felt when he had his first glimpse of the heavens, the one that pulled him out of his fear and despair. Deep calling to deep.

In the next blog post I will tell you why the valley is called "La Vallee du Desert," and we will speak more about silence.  But for today, I wanted to comment about listening.  Benedict, the founder of the first monasteries, opens his "Rule," the document for monastic living, with the word "Listen". Dante learns this when he meets Virgil, his guide, and realizes his life depends upon his ability to listen to him. "Listen with the ear of your heart," Benedictine exhorts.  These Benedictine monasteries, where I have learned to listen, are famous for their hospitality and the welcome of the open door. But we forget at our own great loss that it is not only the hospitality of the open door that aids our journey, but more importantly, the welcome of the open heart. As we travel, dear Reader, examine your heart.  Is it open? We have yet to cross the pass into the valley.

Books I am Loving

at the table with annie
Tacoma, Washington, United States
I am a follower of Christ; an amateur theolog; a trained chef who cooks in the bonne femme tradition, mostly for family and friends; a guitarist and lover of music in many forms; a lover of mountains and oceans; and a Francophile (since my family is European). My professional life has little bearing on any of this. I also love motorcycles, but don't own one. I adore children, and not just my own. I love Gardens, and landscape architecture. I love interior design, and own a formidable collection of books on both. I love history and literature. And I love travelling to France. Mostly, I want to live richly, openhearted to God and to my neighbors; and sensually, savouring life's magical keepings.